THE JOURNAL
by BetweenTwoHands
Friday 11th September, 22:00
ASTAROTHEATRO
The tiny world of a lonesome man


The Journal is a miniature object theatre performance with a tiny stage of 40 centimeters wide by 30 centimeters deep. Appropriately, this performance will take place at AstaroTheatro, Amsterdam’s Smallest Theatre ! Tjin A Ton and Gosia Kazcmarek carefully manipulate dolls, odds and ends, music, torches and shadows to present the reflections of a lonesome man living in a world where objects are taking over.

MARX IS BACK (a play on history)


AstaroTheatro presents a monologue by Howard Zinn adapted and performed by Roberto Bacchilega
Karl Marx has had enough of seeing his revolution taken over by opportunists organizing each time a new priesthood and a new hierarchy, with excommunications and indexes, with inquisitions and firing squads. He is disgusted by media declaring him dead again and again. Karl Marx is back to remind us that his ideas are more alive than ever. He revisits memories of his courageous life and revolutionary theories. We learn about his family, his struggles and the boils on his arse.
Lighting & Sound: Massimiliano Pipolo

WORDS, WORDS, WORDS by David Ives Friday
The “infinite monkey theorem” hypothesizes that if a monkey is left to tap at a keyboard at random it will eventually produce a great literary work.Roberto Bacchilega, Silvia Terribili & Grainne Delaney bring to life this piece of monkey business by American playwright David Ives: a dry satirical look at the meaning of human evolution, from the perspective of a chimp.
Lighting & Sound: Massimiliano Pipolo
Pictures: Tatjana Todorovic 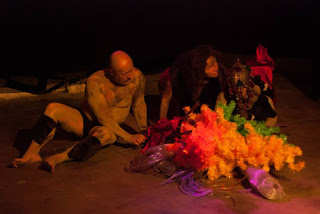 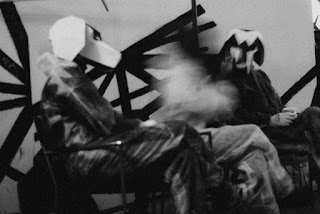 Posted by Sin Sin Collective at 03:16